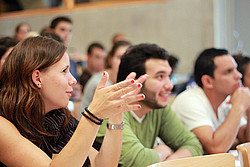 Founded in the 16th century, the University of Strasbourg has a long history of excellence in higher education, rooted in Renaissance humanism. It offers a broad range of degree programmes and trainings in the main academic disciplines:

The University of Strasbourg has over 400 partner institutions in Europe and 175 in the rest of the world. It is a founding member of the EUCOR network and LERU and belongs to several international academic consortia: the Franco-German University, Utrecht Network, AC21.

Strasbourg offers 60 international dual degrees in partnership with universities around the world. As a member of Eucor, it also gives its students the opportunity to complete binational or trinational courses at its Swiss and German partner universities (Karlsruhe, Basel and Freiburg-im-Breisgau). The university is committed to promoting student mobility and has many cooperation agreements with institutions in Europe and beyond. 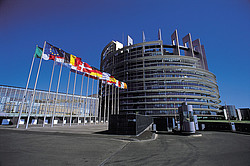 Strasbourg is a pioneer in cross-border cooperation and is located at the heart of the Eurodistrict, which promotes Franco-German partnerships and projects in transport, urban planning, education or health. The city is the seat of the Council of Europe, the European Court of Human Rights and the European Parliament. It hosts the headquarters of many other European organisations including Eurocorps, the European Pharmacopoeia, Arte (Franco-German cultural TV channel) as well as 30 consulates and 46 embassies. 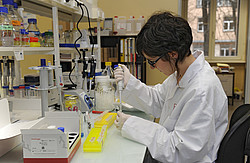 The University of Strasbourg has 72 research units that encompass all disciplinary fields. A centre of excellence in biology, biotechnology, medicine, chemistry and material physics, the University also actively participates in the development of social sciences and humanities.

With its 2 universities, 12 Grandes Ecoles, 250 laboratories and over 4,300 researchers, Alsace is the third largest scientific hub in France and is ranked first in the field of chemistry. It is one of the country's most dynamic and prosperous regions.

A rich historical and architectural heritage 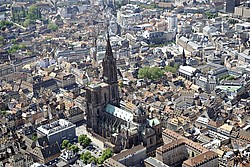 Strasbourg's historical city centre is listed as a World Heritage Site by UNESCO. Commercial and cultural exchanges throughout history have endowed Strasbourg with a rich and well-preserved architectural heritage, including its monumental cathedral, the typical medieval district of Petite France or the 19th century German imperial district.

Strasbourg has many museums, theatres, concert venues and hosts various cultural events throughout the year. These events include music, art and film festivals such as the Ososphere Electronic Nights, the European Fantastic Film Festival or St-art (European contemporary art fair). The city also has a lively nightlife, with plenty of restaurants, bars and clubs.

Strasbourg is renowned for its Christmas market, one of the oldest and most famous ones throughout Europe, which draws millions of visitors each year.

Strasbourg, a great city to live in

A city mixing cultural diversity and firmly rooted traditions, Strasbourg is the country's top city for international students. Its human size, its pedestrian city centre and 500 km of cycling paths make it a very pleasant city to wander around. Vibrant and affordable, Strasbourg is a true student city providing a great learning and living environment.

The University of Strasbourg wishes you a happy new year!

The University of Strasbourg will continue to confront the unknown in order to tackle the major scientific challenges of ...

The University of Strasbourg closes its doors starting from saturday 19th of december, until the 4th of january 2021 for ...

Are women more resistant to Covid-19?

Different perspectives on Covid-19 research: virology. The statistics on Covid-19 indicate that men are more likely to d ...

“Making fun of religions is a part of French tradition”

The terrorist attack that claimed the life of Samuel Paty, a history and geography teacher in Conflans-Sainte-Honorine,  ...